How to Identify Discrepancies in a Candidate’s Job Application

When hiring, you want to use all the tools at your disposal to get an accurate picture of whether a candidate is a good fit or not. That may include asking for a resume and cover letter, having the candidate fill out a job application, conducting phone interviews, holding in-person meetings and calling back the best candidates for additional interviews or pre-employment testing.

Throughout the entire process, you’re looking for signs the candidate has the skills, experience and aptitude to succeed at your company. At the same time, you’re tuning into red flags that could indicate potential problems. Here are a few to be aware of:

An employment gap on a candidate’s job application doesn’t have to be a deal-breaker, but it could be a concern (especially if there is more than one gap). Functional resumes without dates — or resumes that list only years but not months of employment — can also hide chronological details. However, there are many valid reasons for job gaps. Don’t discount an otherwise strong resume just because a candidate has a period of unemployment. Would you bypass a potential star employee because he or she chose to go back to school (or had trouble finding the right job after getting laid off during a recession)? The best candidates will explain any gaps in their resume or job application, so always give them the chance to do so. 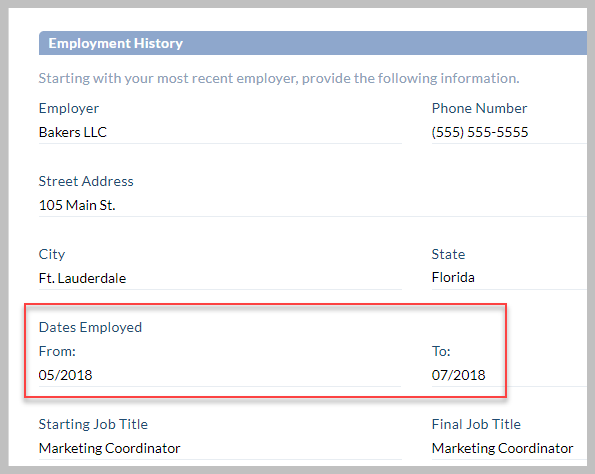 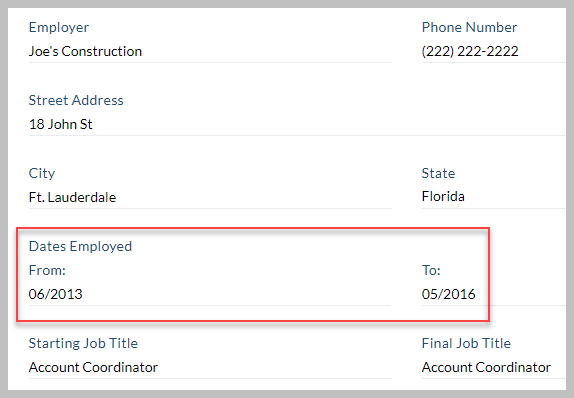 Spelling or grammar errors on a resume or job application could signal a tendency toward sloppy work. After all, candidates should be putting their best foot forward and trying to make a good impression. Carelessness on a job application could also be a warning of what you can expect from the candidate in the future. Put this one at the bottom of the list.

Failing to follow directions is a major red flag. An applicant who doesn’t read your instructions or meet your requests may not be reliable in completing tasks on the job either. For example, if the applicant doesn’t submit a salary history, cover letter and resume as requested, it could be a warning sign. (Keep in mind, however, that a number of cities and states now have laws restricting employers from asking about salary history. Be sure to update your application form and hiring process, if necessary, to avoid over-stepping your legal boundaries.)

Is your request for salary history legal? In some states, no. Seven states ban salary history questions for all employers (public and private): CA, CT, DE, HI, MA, OR and VT. In four states, the ban applies only to public employers: IL, NJ, NY and PA (as well as Puerto Rico).

Watch for signs that a candidate submitted false or misleading information on the job application. It’s not uncommon for job seekers to embellish their skills or credentials on their resumes. Some go so far as to make up academic degrees or fabricate job titles. In fact, one survey published by Inc. stated that 85 percent of employers have caught someone lying on a resume. Such inconsistencies may be obvious if dates and titles don’t match what the candidate posted on LinkedIn.

Giving general descriptions of past jobs or not listing accomplishments could indicate weak skills or a poor performance history. Likewise, overly wordy descriptions of past jobs that read like laundry lists of daily routines, rather than key achievements, shows the applicant doesn’t understand what’s relevant to your available position. Look for applicants who provide targeted, thoughtful responses.

An application that shows years of experience, but little evidence of increasing responsibility, could be a no-no. When reading an applicant’s description of past job duties, look for strong words that show a sense of accountability. For example, words like “led,” “managed,” “created,” “implemented” or “ran” are signs of an employee who took initiative in previous roles.

Using a clean, consistent application form with every candidate is necessary for spotting red flags. The Job Application Smart App captures the same information from all candidates, so you can compare responses and quickly identify inconsistencies. For example, you can assess work history over time to pinpoint gaps and track signs of advancement. Plus, the attorney-developed online application only contains legally permitted questions, so you can be confident you’re in compliance with the most current hiring laws for your state.

(According to a Harris Poll Survey)

As the HR Solutions Manager of ComplyRight, Jaime brings her multi-product management experience to forward-thinking HR processes and solutions. Her career in HR began in 2007 as an HR manager at a small marketing firm. Extremely passionate about HR, she is full of ideas to improve HR in small businesses. She is focused on developing next-generation products to replace traditional HR solutions, making HR management easier for employers.

FUN FACT: Jaime enjoys shopping for shoes and handbags, but she is also highly competitive against her friends in their fantasy football league.

As the HR Solutions Manager of ComplyRight, Jaime brings her multi-product management experience to forward-thinking HR processes and solutions. Her career in HR began in 2007 as an HR manager at a small marketing firm. Extremely passionate about HR, she is full of ideas to improve HR in small businesses. She is focused on developing next-generation products to replace traditional HR solutions, making HR management easier for employers.

FUN FACT: Jaime enjoys shopping for shoes and handbags, but she is also highly competitive against her friends in their fantasy football league.

Thank you for subscribing to our newsletter!

Make sure to add our address smartapps@hrdirectapps.com to your contacts, so that our email won't end up in your spam folder.

We couldn't sign you up. Please report this error to support@hrdirectapps.zendesk.com

Learn the Essentials of Human Resources Recordkeeping Through the