Documentation is essential when it comes to recording employee disciplinary action, yet it’s often an afterthought for small business owners. Instead of having a detailed history at their fingertips at all times, many owners find themselves building a case after the fact, which is a recipe for disaster.

When documenting employee issues, the language you use is more important than you might think. There’s a big difference between writing “Jeff acts crazy” and “Jeff displays undesirable behavior.” Crazy is subjective, while examples of undesirable behavior can be outlined in an employee handbook.

Federal laws protect against discriminatory discipline or termination based on:

Words matter, so make sure to use the right ones for disciplinary documentation. Though you may think a sternly worded warning will inspire change, the wrong words could be taken as a personal attack, creating the exact opposite reaction you intended. Here are seven common mistakes business owners make when addressing employee issues in writing.

Stay the Course with Progressive Discipline

Progressive discipline is the process of using increasingly stern measures with employees who do not correct problems after having several opportunities to do so. The progression usually starts with verbal acknowledgment of a concern, followed by written warnings, final warnings, suspension and termination. Though the term “progressive discipline” sounds aggressive, it’s not a one-way ticket to termination. The ultimate goal is to correct the behavior vs. dismissal. If the employee doesn’t improve, the process allows you to document the journey though dismissal.

Detailing employee behavior clearly, consistently and legally will prepare you for success in the courtroom should an employee ever sue for wrongful termination. The adage, “if it isn’t documented, it didn’t happen,” certainly applies here. 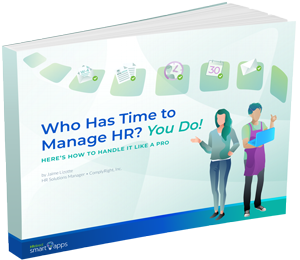 Free E-Book
Who Has Time to Manage HR? You Do!
Here's How to Handle It Like A Pro
Learn How
Tags: Fundamentals for Small Businesses, Small Business HR Best Practices, Small Workforce Woes

Shanna supports legal research and content for the product development of next generation HR/compliance solutions at ComplyRight. Since graduating from St. Thomas University, School of Law, Shanna has practiced law for 8 years. She is a licensed attorney in Florida and Illinois. Her background also includes B2B sales and marketing as well as firsthand experience as a small business owner.

Shanna supports legal research and content for the product development of next generation HR/compliance solutions at ComplyRight. Since graduating from St. Thomas University, School of Law, Shanna has practiced law for 8 years. She is a licensed attorney in Florida and Illinois. Her background also includes B2B sales and marketing as well as firsthand experience as a small business owner.

Read each article below, then provide your email in the form and you'll receive a badge. Earn three badges and sign up for the free Employee Records Smart App and we'll send you a gift!

*Read all 6 articles and receive a badge!

View All Courses >
Going Paperless at Work: A Simple and Sensible App...
10 Company Policies Every Small Business Should Co...
6 Reasons Your Business Needs an Online Job Applic...
Correct and Protect: Your Guide to Employee Discip...
Essential I-9 Compliance Facts for Small Business ...

Why It’s Critical to Display Labor Law Posters (an... Labor law posters are confusing for small business owners. What are they? Why do you need them? What do you have to display? What if you don’t? The b...
Answers to 5 Common W-4 Questions Although the Form W-4 may be considered “routine” paperwork for new hires, it generates a lot of questions. Employees may hit snags when they’re filli...
Volunteers and Discipline: Five Steps to a Drama-F... Nonprofits are skilled at maximizing every resource at their disposal in an effort to make the world a better place. One sensible economic tactic may ...
An Overview of Key Changes with the New I-9 Forms ... The U.S. Citizenship and Immigration Services (USCIS), the agency that oversees lawful immigration to the U.S. issued an updated Handbook for Employer...